We Support the Death Penalty for Corporations 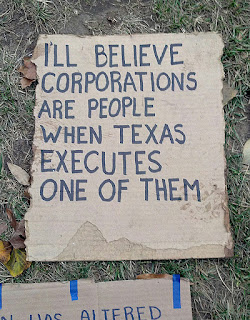 In the United States, most of the states have some form of capital punishment. In addition, capital punishment is practiced on the federal level for certain crimes. Also, in the US, corporations are considered to be people when it comes to constitutional rights and other laws. Since this is the case, we are strong supporters of using the death penalty to punish corporations for crimes against humanity.

What Crimes Are Worthy of the Death Penalty?

There are several ways one can earn a date in an electric chair, gas chamber, or a lethal injection. One of the most popular crimes is “crimes against humanity.” This is kind of like the card game “Cards Against Humanity.” Only, it involves real acts against real people, such as genocide. Also, in most countries retaining the death penalty, intentional homicide will get us bumped off. The more gruesome the murder sounds, the more likely the government will decide that we no longer deserve to live. For instance, if we eat the body of our victim, we can expect to have our life ended.

In the United States, if we are particularly skilled at drug trafficking and get caught, we can also be murdered by the government.

We don’t believe that the government should ever be allowed to take a person’s life. The burden is on the government to rehabilitate its citizens. This should be done in safe facilities until the person is no longer a danger to others. This may take the person’s entire life. It is not our job to decide when people die. In addition, the death penalty has been abused (i.e., innocent people being sentenced, racial biases, etc.) to a point in this country where it is horribly irresponsible for the practice to continue.
But, if we are going to keep it on the books, it is only fair that we are consistent in its application. In other words, there shouldn’t be certain classes that are exempted from the death penalty. The death penalty should be in play for corporations.

This is not a new idea, but it does need to be revisited until action is taken.

What Would the Death Penalty Look like for Corporations?

If a corporation’s actions are particularly negligent and lead to the loss of human life, either here or abroad, the corporation should be punished accordingly. If you were to look at the psychological profile of a corporation, it would be the definition of a megalomaniacal psychopath. They are legally required (a law that would need to change) to earn as much profit as possible at all costs. Therefore, corporations produce unsafe products to save a few bucks and people die. They do this knowingly. That is, many corporations intentionally commit homicide.

For instance, why are R.J. Reynolds, Phillip Morris, Brown & Williamson, and so on allowed to continue to function? They are each responsible for the deaths of hundreds of thousands of people through manufacturing a product (cigarettes) that they knew caused people health problems that would kill them. They are directly responsible. If a person were to intentionally kill even ten people, we would put him to death.
How do you kill a corporation? Well, states have the power to dissolve corporations at will. That is a good start, but it is not really death. In addition, those responsible for the decisions that lead to the intentional deaths also need to be held accountable. Also, the leadership of the organization, such as the executives and board of directors, should not be allowed to hold similar positions ever again. Their careers should be “murdered” so to speak.

If we are going to have the death penalty in this country, we should put it to work for us where it will do the most good. Let’s murder these morally bankrupt corporations.