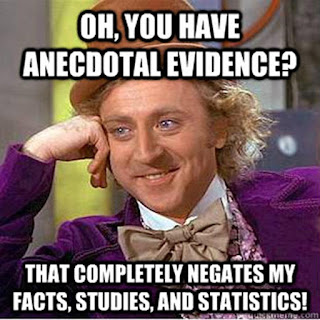 I get in a lot of fights on the Internet. I’ve noticed in comment threads and discussion boards across this great planet of ours that many of us tend to think that our personal experience matters when it comes to widespread phenomena. We think that since we have experienced something that it proves a point. This is called the “anecdotal fallacy,” and we really need to recognize and avoid it.

What Is the Anecdotal Fallacy?

Also referred to as “misleading vividness,” the anecdotal fallacy occurs when we can recall a particular event or phenomenon with sufficient vividness as to make it seem as if we can generalize it to a more widespread population. Though it could be an instance of a more common occurrence, you really cannot base this on one occurrence.

What the hell does any of that mean? I think understanding these logical arguments comes with examples. So, here we go.


Both of the conclusions drawn in these examples are based on anecdotal fallacies. I catch myself doing this all the time. I even have a solid background in statistics and (social) scientific research. It’s an easy fallacy to fall into.
Why Do We Commit the Anecdotal Fallacy?

At a different and perhaps more valid level, there is an understandable distrust of the mainstream media. That is, news sources can post about a phenomenon all they want, but why are we to believe them? They’re probably just trying to push an agenda. Plus, the media feed off of sensationalism. They want us to be afraid of those white dudes with backwards hats or to think that teenagers are destroying this country or whatever sells papers or gets the clicks.

When we don’t trust the media, where can we get our information? We’ll always have our personal experience.
What Can We Do?

There are a few things we can do: