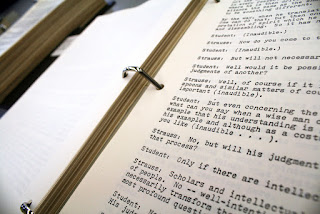 In a surprise move today, Democratic presidential nominee Hillary Clinton has released the transcripts of the speeches she gave to a number of Wall Street firms. The surprising part is that she released them to Square Peg, Round Planet. Her spokesperson said this bold move was made because they wanted to be able to say, “There the transcripts are released. Shut your fat face!” Yet, they knew that no one would trust such an obscure media outlet.

In all, Clinton sent us 92 speech transcripts from between 2013 and 2015 for which she was paid an average of $235,000 per speech. We will release all of the speeches in due time. We are first going to start with an excerpt from a speech she made last year at a Goldman Sachs conference in New York City:

“Can I get a light? *a few men come to the stage with burning stacks of $100 bills to light her cigarette* Thank you. Isn’t it great being rich? *applause* It has never been a better time to be rich in America. We have weakened government agencies so they have no ability to enforce the laws. We have left gaping loopholes in our laws to help big businesses do as they wish. We have this beautiful revolving door between Wall Street and Washington.

“And, no one raises a fuss. The masses have their sports and TV to keep them distracted. And, those who do pay attention blame Mexicans and Muslims for their problems. *the audience laughs*
“Unfortunately, 2016 will be a transitional year with a new president coming to power. However, I think we can be sure the results will be favorable. *another round of laughter* I stand to raise more money than any presidential hopeful ever thanks to Goldman Sachs and other financial institutions. We share a common interest in maintaining power and are willing to do anything to achieve it.

“Few people know that I killed the first woman Bill cheated on me with. Not because I was upset that he did it. I knew he couldn’t keep his prick in his pants. *laughter* I did not want that little SOB hurting my chances at power. As time went on and we became more powerful, it became easier to sweep things under the rug. American citizens want to believe those in power are decent human beings. And, we give them this illusion.

“One way I provided this illusion while Secretary of State was to use my own private server for emails. This way, I could destroy anything incriminating. And, we all know that if there is no smoking gun or body, then there is no crime. We all know that you never admit anything. Put the burden of proof on the conspiracy theorists. Oh yeah: I have the media on my side to make sure my accusers are called ‘conspiracy theorists.’

“Anyway, we both know I’m not really here to give a speech. You paid me a quarter million dollars for this to get around FEC campaign rules as I ramp up for my 2016 run for president. You are scratching my back, and I will scratch yours. Whether it is making sure we don’t break up the big banks or, if it does become a possibility, making sure it is really just a front for another Wall Street power grab, I’ll be there in 2016 to scratch your back! *applause*

“And, you can rest assured that I will do all that I can do to continue to find new markets for big businesses to exploit, and I will protect my friends in power from ever having to face repercussions. After all, the future of our country depends on us being above the law.

“Thank you! And, I look forward to serving you from the White House in 2017!”
Posted by Lansing Foodies at 8:00 AM