Celebrity Votes Should Count for More 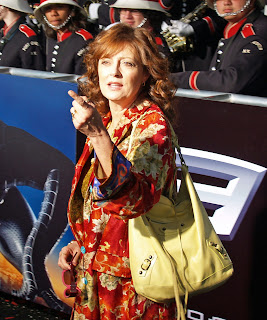 Every presidential election, we get a long list of celebrities chiming in with who they think is the best candidate. For instance, Susan Sarandon recently came under fire for endorsing Bernie Sanders and suggesting she would not vote for Hillary Clinton if she gets the nomination. Other prominent endorsements on the left include Killer Mike for Sanders and George Clooney for Clinton. On the other end of the spectrum, you have people like Tom Brady endorsing Donald Drumpf in an effort to somehow be even more hated.

The media eats these endorsements up while the rest of us collectively roll our eyes. This is why I am suggesting that we just go ahead and make celebrities’ votes worth 1,000 votes, so they will not feel compelled to influence us with their charming smiles and nice tushies.

Why Do They Do It?

For the most part, whenever a celebrity talks politics, it has a polarizing effect on their audience. Most famous people have bipartisan appeal until they open their mouths about politics. This only serves to alienate many of their biggest fans, while making others love them even more.
That said, the pessimist in me believes celebrities publicly weigh in on issues and candidates because they believe it will get them free publicity, it will cause like-minded supporters to love them more, that it will attract more like-minded individuals, and they simply ignore the fact that they will be alienating others. In other words, they do it for the attention whoring.

The more forgiving explanation would be that they are simply standing up for what they believe in. Consequences be damned. They simply want to influence others to their way of thinking.

Let’s Shut Them up!

In order to get these celebrities to shut up, I propose that we give them 1,000 votes each election in exchange for not expressing their opinions publicly. If they do express an opinion publicly, we ban them from voting ever again and have a team of world-class soccer players on hand ready to kick them in their most sensitive areas.

This will keep the seediest celebrities from doing their little attention whoring shimmy. And, those who genuinely believe in a candidate will have a way to make an impact. And, most celebrities are too disinterested or busy to vote, so they won't take advantage of their added influence. Best of all, the rest of us won’t have to put up with celebrity endorsements since they will no longer be a thing.

Plus, when you get down to it, aren’t celebrities better than the rest of us? To get a good idea of how much more celebrities matter, compare how many people mourned when Prince died to when your Uncle Harry passed.
Others Should Also Be Able to Earn More Votes

Celebrities are by no means the only entities that feel the need to share their opinions about candidates. We also hear from businesses, newspapers, unions, politicians (who already get more say in the form of superdelegates), and so on. Wouldn’t it be nice if we could get these groups to clam up and focus on their real work instead of telling us who to vote for? Let’s also give them extra votes based on how influential they are.

Once we remove all of these uninformed or nefarious agenda-pushing endorsements, we will have more freedom to turn to the most trusted source around: our own research.