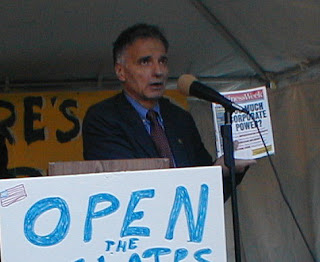 The presidential nomination races for both the Republicans and Democrats is hotly contested right now. And, it appears that all of the remaining candidates are in it for the long haul. But, what happens after the conventions? Will the losers take the noble course and endorse the parties’ nominees? There is some talk of Trump and Sanders running as third party candidates or as “write-ins.”  To block the possibility of this, Congress needs to act right now and ban third parties and ensure that the votes of the people go to those who are deserving of the votes: the Republican and Democratic nominees.

Let’s take a little jaunt down memory lane. Watch out for that rubble there! It’s 2000, and this pesky malcontent Ralph Nader, a liberal and essentially a Democrat who has done nothing for this country except complain, insists on attacking Al Gore, the Democratic nominee and rightful heir to the office President Bill Clinton was forced to vacate. (By the way, Clinton came to power because of another evil third-party candidate, Ross Perot).

Well, as it turns out, Nader stole enough votes from poor Gore to give the election to George W. Bush. Of particular note was the votes Nader stole in the hotly-contested race in Florida. The vote was close enough to challenge it, but the pious Gore did not want to drag the country through another scandal. Of course, “W” then went on to start imperialist wars all over the world, a first for a United States president.
If we had the law I’m proposing that would ban third-party candidates, Al Gore would have been president, and we would have our environment! Instead, we re-elected Bush (which we can probably also blame on Nader), and no one in the world likes us.

Democrats and Republicans Have a RIGHT to Our Votes

Nobody knows when or how the Democratic or Republican Parties started, but we do know that their candidates perform the public service of running our country, and they have been doing so for hundreds of years. For this, we are forever in indebted to them. In fact, we OWE them our votes.

Yes, these are private organizations that can make decisions and money any way they see fit, but they are providing a public service to us out of the kindness of their hearts. They keep this country running at all levels. These Green Parties and Libertarian Parties and other cockamamie groups just muddy the waters. They have done nothing for this country and serve as leeches on Lady Liberty’s ripe tits!
Those independent voters who think they are so unique. They think that because their mommy and daddy love them so much that they can grow up to be astronauts. They need to get in touch with reality: We are a two-party country.

“But, I Want More than Two Choices!”

As demonstrated above, it is time to outlaw the un-American third parties in this two-party country. They have a right to our votes, and it’s time we give them the respect they deserve.