Raising the Minimum Wage Is the Right Thing to Do 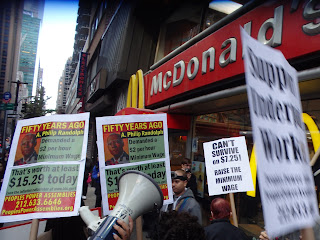 Oregon recently passed a bill that will gradually raise the minimum wage over the next six years. And, in comment threads on articles across the country detailing the move, we can find soundbite superstars claiming that it will be the death of small business and prices will skyrocket. The arguments against raising the minimum wage are many and none of them are based in fact. Let’s examine these today.

The argument is that small businesses are barely scraping by. And, if they have to pay their employees a living wage, they won’t be able to compete with transnational corporations. One of the biggest reasons why small businesses fail to compete with transnational corporations is the corporate welfare system. This allows them to destroy their less-politically-skilled competition. If we really cared about small businesses, we would be against OUR government using OUR tax dollars to subsidize the big dogs.
Also, if we’re so concerned about small companies, why don’t we give them our business? Rather than going to Walmart, try local shops. Vote with our dollars. Keep it local.

Minnesota, Seattle, and other areas have recently raised their minimum wages significantly. Despite how hard news sources try to find business owners who are hurting from this, they come up empty. It’s just not “a thing.” There’s NO evidence that raising the minimum wage will hurt small businesses.

Lastly, if a business can’t afford to pay its workers a living wage, they have a terrible business model and shouldn’t be in business. Good riddance.

“Minimum wage was never meant to be a living wage. It’s for teenagers to get their first job.”

That simply is not true. Even if minimum wage were not meant to be a living wage, it has become that way in practice. With the goal of boosting profits, corporations have kept less jobs in America. This has forced people who are supporting a family into low-paying jobs, while teenagers are often SOL.

And, what’s wrong with paying teenagers $15/hour? With the student loan crisis in this country, don’t we want to give teenagers an opportunity to get a good education without facing crippling debt?

“Burger flippers should not get paid as much as our military, EMTs, etc.”

Those who risk their lives to benefit society should receive a life of comfort. That’s a different battle and irrelevant to this discussion. Also, try flipping burgers. You have to be on your feet all day over a hot grill while people treat you like shit. There’s no health care. It’s not fun. I’d even wager that your job, whatever it may be, is better and pays better.
Either way, the bottom line is that just because we work hard to live a comfortable life it doesn’t mean that society as a whole would not benefit from raising the minimum standard of living. That’s what we get with an increased minimum wage.

“If you want better pay, learn a skill.”

We need to spend more on education. Education needs to be a priority in this country. No one should have to go into crippling debt to learn. This is something that would benefit every last person in this country. As it is, learning skills through technical schools, colleges, or other institutions is expensive. Plus, the return on investment keeps decreasing. And, honestly, not everyone is cut out for skilled trades. Should they have to work 80 hours a week to get by? That is cruel.

The fact of the matter is transnational corporations hold all the cards in the US. They control the market. That being the case, they have used every tool at their disposal - including buying politicians, introducing “free trade” agreements, exploiting Third World countries, etc. – to keep wages as low as possible.

While the elites continue to experience record profits, the wages in the US have not increased in decades. Raising the minimum wage is an attempt to right this wrong, and it’s the only way we will get wages to increase. Fighting a wage increase is fighting the most vulnerable members of our society.


What are your thoughts?

Posted by Lansing Foodies at 8:00 AM