BOOK REPORT: “A Documentary History of the Negro People in the United States, Vol. 1” 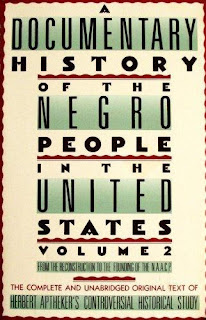 In the interest of promoting knowledge, self-improvement, and literacy, I will occasionally write old-fashioned book reports about books I’ve recently read. I recommend checking out any of the books we report on and would love to hear your thoughts. Also, I am always open to recommendations.

A Documentary History was compiled by Herbert Aptheker (1915-2003) and published in 1951. Aptheker was Jewish and learned about the oppression of African Americans firsthand when accompanying his father on business trips to Alabama at the age of sixteen. This would inspire this seven-volume series. It’s also worth noting that in the 1950s, Aptheker was blacklisted from academia because of his membership in the Communist Party.

A Documentary History is a compilation of over 200 documents giving contemporary details of life for African Americans in the United States from before the Revolutionary War until the end of the Civil War. I’d estimate that about 95 percent of the documents are written by African Americans. Before each document, Aptheker provides context and explains what impact it had. The book is broken up into four parts: the Revolutionary Era, the Early National Period, the Abolitionist Era, and the Civil War. The lion’s share of the documents is contained within the Abolitionist Era.

W. E. B. Du Bois writes a nice preface for the book, and there are documents written by Frederick Douglass, Henry Highland Garnet, William Wells Brown, and many other prominent African Americans of the period. Topics covered include the Fugitive Slave Law, voting rights, schooling, and more.

The first section of A Documentary History had me a little nervous. It was written in the language of the day by people who were denied educational opportunities. It was rough, and I considered chucking the 530+ page book. But, I’m glad I stuck with it. Once I got into the 19th century, the language was closer to what we use today and thus much easier to understand. A slow reader can get through this in about 27 hours.

Contribution to Overall Knowledge
I’m not a scholar in African American studies. If you have taken a college course on early African American history, then you may already know most of what is contained within this book. As it is, I only have my fading memory of high school AP US History and my recent reading of A People’s History. I had a vague idea of the Emancipation Proclamation and the Fugitive Slave Law, but I’d never learned about or thought about the ramifications.

Basically, even those African Americans who were living free in the Northern states lived in fear of being kidnapped into slavery without an opportunity to defend themselves in court.

I would recommend this book to any white man living in the United States. I’d especially stress that anyone defending “the Confederate Flag” (really the Second Confederate Navy Jack) read this book to understand what they are supporting.

It’s important that the privileged class (that is, white men) understand the history of race in this country and that equality doesn’t happen overnight. There are still many ways in which different groups of people are far from experiencing equality in this country. This provides a blueprint for other groups seeking equal rights. It also demonstrates the backlash from the dominant groups that follows from gaining those rights.


The book was not life-changing, but I did learn quite a bit, and it helped me look at a lot of United States history from a different perspective. It added a lot to my intellectual development.
Posted by Lansing Foodies at 8:00 AM