Bernie Sanders Is NOT a Nazi, You Intellectually Lazy Dolt 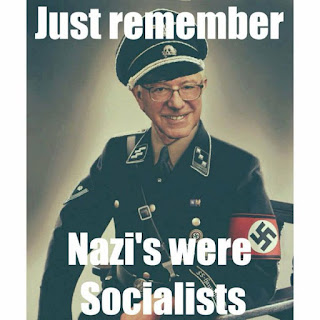 I don’t usually like to call people names, but it seemed fitting considering how labels are abused during the current election cycle. One that keeps coming up time and time again is that Bernie Sanders is a Nazi. In fact, a nominally respected magazine even went to great pains to provide parallels between the Jewish politician and Hitler. And, if you have conservative friends on social media, you have likely seen Sanders photoshopped into Nazi paraphernalia. Today, I am going to show how wrong this comparison is.

“Bernie Is a Socialist and so Were the Nazis.”

Nazi is a shortening of National Socialist. They were the National Socialist German Workers’ Party. Socialist is probably the word you should focus on least in that title. First and foremost, they were nationalist. They believed in the supremacy of the German race. Does that sound like anything Sanders has said? The man has fought for the rights of just about every marginalized group. For a more detailed examination of this comparison, check out this article from PolitiFact.

“Well, Bernie Is Still a Socialist. And, We Know How that Worked in Soviet Russia.”

Bernie Sanders isn’t interested in either of these alternatives. For the most part, he believes that the means of products should still be in private control but with common sense legislation that will keep corporations in check.

“The United States Is Capitalist: the Only Free Economic System. Bernie Hates Capitalism.”

The United States is not capitalist. You could claim that it features crony capitalism, though. Here’s how it works: you pay a relatively small amount of taxes. Some of this money goes to services that you use, such as infrastructure. A significant portion goes to fund the military. This involves giving large contracts to corporations that happen to be friends with whoever is in charge of the disbursement of this money, typically a former or future executive for the corporation.
This is not just played out in the military. You see this in every sector of our economy. Your tax dollars are going to large corporations to pad their profits. The money of the people is used to bail out companies who take risks, but they get to keep their profits. This is not capitalism. And, Sanders wants our tax dollars to be used to help us, the people.

I see a lot of arguments on message boards and social media where commenters can’t seem to see eye-to-eye on terms. There’s one easy solution to this: discard them. Labels are created to make discussion easier, but if you aren’t able to agree on the terms, then it isn’t making it easier. Instead, focus on what the candidates actually stand for. Learn about what the Nazis and Soviets actually stood for.
By the way, words like “socialism” and “communism” have been demonized by the United States since the end of World War II in a concerted propaganda campaign. I recommend reading some Karl Marx, so you can learn for yourself whether these economic systems are the bogeymen they are believed to be.

Do you still think Sanders is a Nazi? What are your thoughts?
Posted by Lansing Foodies at 8:00 AM